The lost silver rijksdaalders of the Dutch steamer Prins Frederik

Sinking of a mail steamer: the Prins Frederik
By Pascal Kainic

The "Prins Frederik", Captain K. Visman, was a luxuriously-fitted iron steam ship of 2,978 tons gross tonnage built in 1882 by J.Elder & Co. of Glasgow, in Scotland for the Dutch shipping line, Maatschappy Nederland.

She departed from Amsterdam on June 21st, 1890 destined to Java, Indonesia, with troops (75 officers and men), a number of passengers, a valuable general cargo and the usual mails. Everything went well until she reached the Bay of Biscay. Ushant Island was observed at a distance of about 10 miles. At the time, the vessel was making full speed of about 11.5 knots, but a dense fog prevailed in the area and as far as can be ascertained, the ship reduced at half speed in consequence.

At the same time, a British steamship, the "Marpessa", Captain Geary, was on her way across the Bay of Biscay in the opposite direction and both ships kept extra men in the bows on the look out. Neither vessel saw the other until it was too late to prevent a collision. It was so sudden and the "Marpessa" struck the "Prins Frederik" amidships with a terrific force, cutting her right down to the water's edge. As the vessels separated, the water rushed into the mail steamer, flooding engine rooms and compartments, causing her to sink within only 7 minutes.

In the meantime, the boats were lowered with comparatively little difficulty, and the passengers, women and children first, were got into them and conveyed to the "Marpessa" who stayed afloat. Some trouble was cause by the anxiety displayed by some of the passengers to save their valuables. The vessel was obviously sinking fast, yet one lady risked her life by delay in order to obtain her cash box, in which she succeeded, and another had to be prevented from going back to the already flooded state rooms, where she had left a sum equal to £ 1,200 sterling.

The troops were then taken to the "Marpessa" too, but seven were found to be missing; one officer, Major van Wyke and six privates of the Dutch colonial army. In all, 170 persons were saved, of whom 83 composed the crew. She, then, was able to to reach Falmouth in safety.

This collision sealed the fate of the unfortunate "Prins Frederik" on the 25th of June 1890, by 47° North, 6° 30 West, and according to reports, beside a valuable general cargo, pay for the troops stationned in Java  consisting of 12,000,000 guilders packed in casks, went to the bottom  of the sea (others say only 400,000 silver rijksdaalders...!)


In the 1980's and 1990's several attempts to locate the wreck by various salvage companies failed. One thought it could be in approximately 150 meters of water, but in analyzing the various reports produced about the disaster, it was acknowledged that it could also be in 3000 meters ! Anyhow, the treasure is still under the waves for the lucky finders... Not yet known... 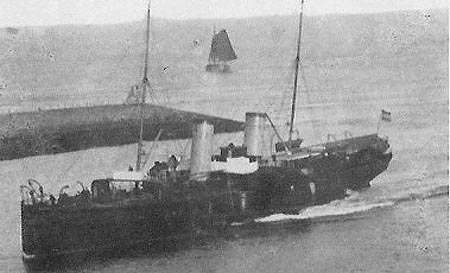 The "Prinzess Marie" or "Elisabeth", similar to the "Prins Frederik"