The explosion of the Portuguese Frigate Dona Maria II

The explosion of the Portuguese frigate Dona Maria II

Intelligence was received of the explosion of the Portuguese 32-gun frigate Donna Maria II, at Typa, Macau at about two P.M. on 29th of October last; and that, of those on board, scarcely a man survived.

It appears that a salute was fired at noon on occasion of the birthday of the King Consort of Portugal: about half-past two the vessel blew up with a tremendous explosion, and, of a crew of upwards of 220 officers and men, only nine were picked up by the boats of the United States sloop-of-war Marion, which were instantly dispatched to render assistance; and, of these nine five have since died.

The Donna Maria II was one of the three frigates sent out for the protection of Macau after the murder of Governor Amaral. The frigate's crew were lascars from Goa, with the exception of the marines.

Nothing certain was known of the cause of the explosion, but it was supposed to have been the work of a Chinese incendiary, as a rumor had previously prevailed that the vessel was to blown up.

The son of Captain d'Assis, a lieutenant, and a purser chanced to be on shore at the time of the catastrophe.

A rumor was current that Captain Glendy and some of his officers, besides civilians, were on board at the time, but this, we are happy to say, was not the case; and though the Marion was anchored close to, she escaped injury, her safety lying in her very proximity, the most dangerous projectiles being thrown over or beyond her.

The body of Captain d'Assis e Silva has been found, as he was in his cabin at the time of the explosion.

The amount of private property and money on board was considerable, the frigate having been under orders to proceed from Goa as a transport, when the news of Governor Amaral's murder altered her destination 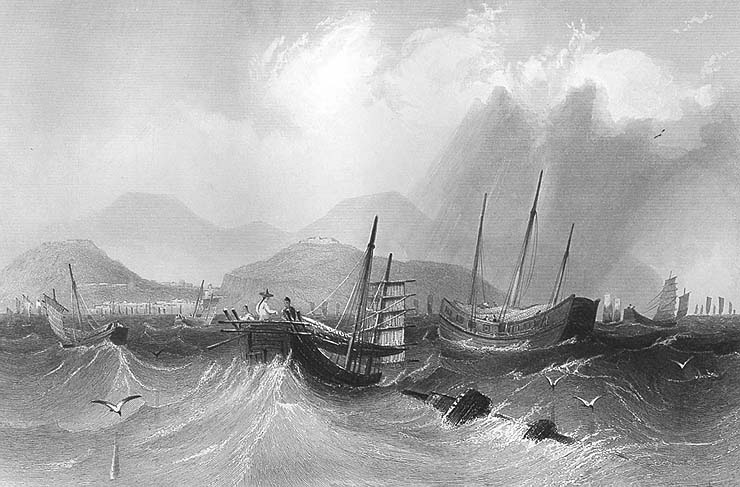 View of Macau bay from the sea