The lost and found golden cargo of the
"Royal Charter"

The Royal Charter was a steam clipper which was wrecked on the east coast of Anglesey, broken up on these rocks near Moelfre, on 26th of Oct., 1859. The precise number of dead is uncertain as the passenger list was lost in the wreck, but about 459 lives were lost, the highest death toll of any shipwreck on the Welsh coast. It was the most prominent victim of about 200 ships wrecked by the Royal Charter Storm.

She was built at the Sandycroft Ironworks on the River Dee and was launched in 1857 and was a new type of ship, a 2719 ton steel-hulled steam clipper, built in the same way as a clipper ship but with auxiliary steam engines which could be used in the absence of suitable winds.

The ship was used on the route from Liverpool to Australia, mainly as a passenger ship although there was room for some cargo. There was room for up to 600 passengers, with luxury accommodation in the first class. She was considered a very fast ship, able to make the passage to Australia in under 60 days.

In late October 1859 the Royal Charter was returning to Liverpool from Melbourne. Her complement of about 371 passengers (with a crew of about 112 and some other company employees) included many gold miners, some of whom had struck it rich at the diggings in Australia and were carrying large sums of gold about their persons.

A consignment of gold was also being carried as cargo. As she reached the north-western tip of Anglesey on 25th October the barometer was dropping and it was claimed later by some passengers, though not confirmed, that the master, Captain Thomas Taylor, was advised to put into Holyhead harbour for shelter. He decided to continue on to Liverpool however.

Off Point Lynas, the Royal Charter tried to pick up the Liverpool pilot, but the wind had now risen to force 10 on the Beaufort scale and the rapidly rising sea made this totally impossible. During the night of 25th/26th October the wind rose to force 12 "hurricane force" in what became known as the "Royal Charter gale". As the wind rose its direction changed from E to NE and then NNE, driving the ship towards the east coast of Anglesey.

At 11 p.m. she anchored, but at 1.30 a.m. on the 26th the port anchor chain snapped, followed by the starboard chain an hour later. Despite cutting the masts to reduce the drag of the wind, the Royal Charter was driven inshore with the steam engines unable to make headway against the gale.

The ship initially grounded on a sandbank, but in the early morning of the 26th the rising tide drove her onto the rocks at a point just north of Moelfre on the eastern coast of Anglesey.

Battered against the rocks by huge waves whipped up by winds of over 100 mph, she quickly broke up. One member of the crew, Joseph Rogers, managed to swim ashore with a line, enabling a few people to be rescued, and a few others were able to struggle to shore through the surf.

Most of the passengers and crew, a total of over 450 people, died. Many of them were killed by being dashed against the rocks by the waves rather than drowned.

Others were said to have drowned, weighed down by the belts of gold they were wearing around their bodies. The survivors, 21 passengers and 18 crew members, were all men, with no women or children saved.

A large quantity of gold was said to have been thrown up on the coasts near Moelfre, with some families becoming rich overnight.

The gold bullion being carried as cargo was insured for £322,000, but the total value of the gold on the ship must have been much higher as many of the passengers had considerable sums in gold, either on their bodies or deposited in the ship's strong room.

Many of the bodies recovered from the sea were buried at Llanallgo churchyard nearby, where the graves and a memorial can still be seen. There is also a memorial on the cliff above the rocks where the ship struck. Almost exactly a century later in October 1959 another ship, the Hindlea, struck the rocks in almost the same spot in another gale.

This time there was a different outcome, with all the crew being saved by the Moelfre lifeboat.

The aftermath of the disaster is described by Charles Dickens in The Uncommercial Traveller. Dickens visited the scene and talked to the rector of Llanallgo, the Rev. Stephen Roose Hughes, whose exertions in finding and identifying the bodies probably led to his own premature death soon afterwards.

Dickens gives a vivid illustration of the force of the gale: So tremendous had the force of the sea been when it broke the ship, that it had beaten one great ingot of gold, deep into a strong and heavy piece of her solid iron-work: in which also several loose sovereigns that the ingot had swept in before it, had been found, as firmly embedded as though the iron had been liquid when they were forced there.

The disaster had an effect on the development of the Meteorological Office as Captain Robert FitzRoy, who was in charge of the office at the time, brought in the first gale warning service to prevent similar tragedies. In recent years the site of the wreck has been popular with divers.

Much of the gold which was not washed ashore was in fact recovered by salvage divers in the months after the wreck, but many artefacts have been recovered in recent years. Veteran diver Sydney Wignall recalls discovering a large gold bar on the site in the early days of scuba diving in his book In search of Spanish Treasure : A Diver's Story.

The bar was jammed solid in some iron work on the sea bed, he used his knife to try and free the bar. He found the saw edge of his knife cut through it very easily, but before he could cut all the way through his air supply ran out and he had to leave it, the flakes of metal stuck on the saw blade of his knife were essayed and found to be almost pure gold. Before he could return to recover it another storm hit the site and he was unable to relocate the gold bar.

There is no record of this bar being recovered, so there is a very good chance it is still down there somewhere. The remains of Royal Charter lie in very shallow water (8-10 feet), but the visibility at the site is usually very poor indeed. The wreck was smashed to pieces in the original storm and has broken up even more since.

I have heard that the last group of divers to make a serious effort to recover gold from the wreck were stopped after there were complaints from local people that explosives were being used to blow up sections of the hull.

Reports suggest that Australian gold sovereigns from the Royal Charter still occasionally turn up on the beach after major storms. 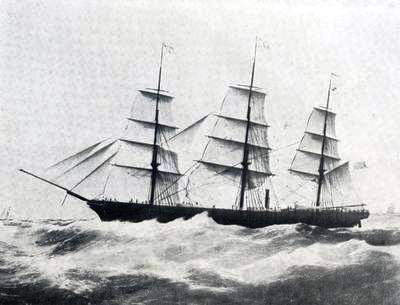