A Spanish galleon that sank with treasure of plundered gold 343 years ago has been found by divers off the coast of Ecuador, it was revealed on March 11th. The Spanish naval flagship La Capitana Jesus Maria went down in 1645 with a cargo of gold, silver and jewels stolen from Peru’s Indians.

The treasure is believed to be worth up to £5bn, according to Norwegian reports.

'It’s completely unbelievable. I can hardly believe that I found the ship.' said Norwegian diver Anton Smith about the discovery.

An international consortium has been searching for the vessel for three years. As the finders they can keep half the treasure, with the rest going to the government of Ecuador.

'It is like walking right into a fairy tale,' said a spokesman for the Norwegian consortium which has helped fund the treasure hunt, 'People have been searching for this ship for 300 years without success.

La Capitana Jesus Maria was sailing from Peru to Panama when it sank in shallow waters. Even though the captain survived and was able to note the ship’s approximate position, it remained hidden for centuries.

'It’s not very deep there, only about 50 feet, but part of the problem is that the waters are very turbulent and the last ten feet are very silty. So it has been very difficult to get orientated.' said Norwegian investor Morten Moe.

From the registers of the Archivo General de Indias in Sevilla, the passengers on board declared that the contraband was more than 10 million pesos in treasure and the Plaza de Armas of the city of Los Reyes would be too small for it...!

The story of this “Unlucky Treasure” begins aboard the ship know as 'La Capitana' which was the largest vessel of her time built in South America.

She weighed 1,150 tons with a length of 122 feet and a beam of 40 feet. Carrying 60 guns, 44 of which were bronze, the ship was the flagship of the Viceroyalty of Peru and the South Sea Armada (an area which covered the countries of Peru, Bolivia, Chile, and Ecuador).

On October 26, 1654, the pilot, Miguel Benitez, was confident that they would clear Punta Santa Elena safely and make port at Isla de Plata. At 11:00 p.m. that night, however, a passenger spotted breakers ahead.

What follows is a quote from Captain Sosa: 'The danger was very near and dead ahead. In turning, we found ourselves in the midst of reefs. After hitting three times, our rudder fell off. The pumps were started because the shock of each impact was splitting our seams.

Water was pouring through the caulking. In addition to the three pumps being manned, everyone on board was bailing with jars, bowls and buckets. We worked all night. At daylight we had about eight feet of water in the hold. Everyone was exhausted.' In the testimony of another crew member it was also noted that 'there was difficulty getting the anchors down because there were mountains of unregistered goods stored on the foredeck and on top of the anchor cables.'

La Capitana was so overloaded that she drew water up to the second deck. It was stated that if the ship had not been so heavily loaded it would have been able to free itself from the bottom beneath 22 feet of water.

The morning of October 27th was total havoc; everyone was exhausted and near panic. Some people tried loading their pockets with gold and silver and swimming to shore; at least twenty people drowned in their attempts to reach safety.

By high tide Captain Sosa managed to move La Capitana closer to shore and permanently grounded her in shallow water. Here he and his silver master worked feverishly and salvaged much of the treasure, cargo and 4 of the 44 bronze cannons.

For greater access to the treasure and other valuables below deck, they burned the ship to the water line. Many of the compartments there were not yet filled with water. At the peak of salvage operations, up to 52 divers worked the wreck with only one fatality; a diver bitten by a sea snake. Captain Sosa was able to salvage 1,500,000 pesos from the wreck and salvagers sent later from Spain recovered another 2,000,000 pesos; it was known that more treasure remained.

This started a major scandal as only 3,000,000 pesos is silver was supposed to be the cargo; later estimates placed the total aboard closer to 10,000,000. During the trials that followed, several people were jailed and condemned to death for neglect of duty.

Fate was not done with the treasure of La Capitana. The salvaged treasure was moved to Cuba where it was loaded onto another galleon, 'Nuestra Senora de la Maravilla', which sank on January 4, 1656 and was subsequently the subject of salvage operations. A salvage vessel sent from Cuba to convey the salvaged treasure from the 'Maravilla' also sank.

In 1996 this story continued when this shipwreck was discovered by Herman Moro and his crew. After reaching an agreement with the country of Ecuador, he was granted full ownership of half the salvaged treasure. This amazing treasure now, remarkably, rests in our own Great Falls. 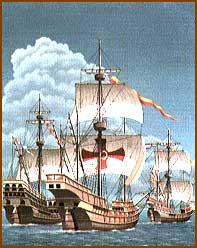