Story of the loss of HM Troopship Birkenhead 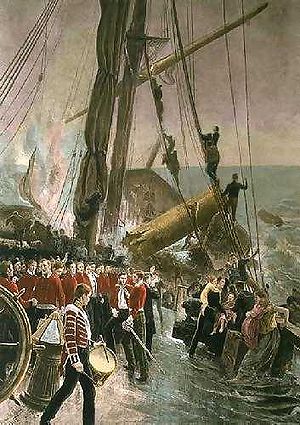 The wreck - by Thomas M. Hemy

The Birkenhead was a British iron, paddle-wheel frigate of 1400 tons and one of the first iron-hulled ships built for the Royal Navy. Initially designed and built as a frigate at John Laird's shipyard in 1845, she was converted to a troopship before being commissioned in 1848.

In December of 1851, the Birkenhead sailed from Cork in Ireland, under the command of Captain Robert Salmond.

She had 638 people on board, conveying troops from ten different regiments, but predominantly from the 73rd Regiment of Foot, to the 8th Xhosa War (then referred to as the "Kaffir War") against the Xhosa in South Africa. including 20 women and children. In total, there were on board 138 ship's officers and crew as well as 480 army officers and drafted men to aid Lieutenant-General Sir Harry Smith in the Eighth Frontier War being waged at the Cape (East London).

Reaching Simon's Bay on the 23 of February, the Birkenhead sailed thence at 06:00 ,on 25 February 1852, for Algoa Bay In order to make the best possible speed, Captain Salmond decided to hug the South African coast, setting a course which was generally within 3 miles (4.8 km) of the shore. Using her paddle wheels she maintained a steady speed of 8.5 knots.

The sea was calm and the night was clear as she left False Bay and headed east.

At about 02h00 on the 26th February, she struck a submerged rock off Danger Point and in an instant the lower deck flooded, drowning many men in their bunks. All the surviving men, officers, women and children went up on deck. Lieutenant -Colonel Seton of the 74th Foot Regiment took charge of all the military personnel.

The men were commanded to stand drawn up in line and to await orders and 60 men were sent to man the pumps. The Captain made a grave mistake when he ordered the Birkenhead to be put astern; an action which caused the hull to rip open, further.

The sudden inrush of water swamped the boiler fires andthe vessel began to break up: in its collapse the funnel crushed the paddle-wheel lifeboat, killing the men who were trying to free it for launching. Lack of maintenance and thick layers of paint frustrated the men who were trying to launch the boats. Eventually two cutters and a gig were launched and the women and children were rowed away from the wreck to safety.

The horses were cut loose and Captain Salmond shouted to his men that everyone who could swim, must save himself by jumping overboard and to make for the boats. At this order, Lieutenant-Colonel Seton commanded his men to stand fast, for should they make for the boats, they would endanger the lives of the women and children.

The Birkenhead has secured a place in history due to the gallantry of her men, who, in the face of great danger, allowed the women and children to escape in the boats before trying to save themselves.

The Birkenhead broke up rapidly. Twenty-five minutes after she struck the rock, only the topmast and topsail yard were visible above the water, with 50 men clinging to them. The bow broke after 12 minutes, and then the vessel broke in two abaft the engine-room, the stern sank immediately.

In the tragedy 445 People lost their lives. 193 People, including all the women and children, survived. The wreck of the Birkenhead lies in 30 metres of water.

She is reputed to have carried 250,000 pounds in "specie" (gold and silver coins), which was the military pay packet for the troops fighting up in East London.

According to Charles Shapiro's archives research, it was stated during the Court-martial of Richard Bevan Richards (the Master's assistant), that there were indeed a 120 boxes of specie on board !

Since her sinking, many salvage attempts have been made in search of this treasure, but to date, the specie remains unfounded.

A thorough archaeological and salvage excavation was carried out by the combined efforts of Aqua Exploration,Depth Recovery Unit groups and Pentow Marine Salvage Company (today renamed Smit Marine), from 1986 to 1988.

Some artefacts and gold coins were recovered were but only a handful, which were "private purses" belonging to officers.

Thanks to Charles Shapiro/Aqua Exploration for the photos and text