Loss of the Elingamite. Fate to fortune

The loss of life and gold on the
"Elingamite" 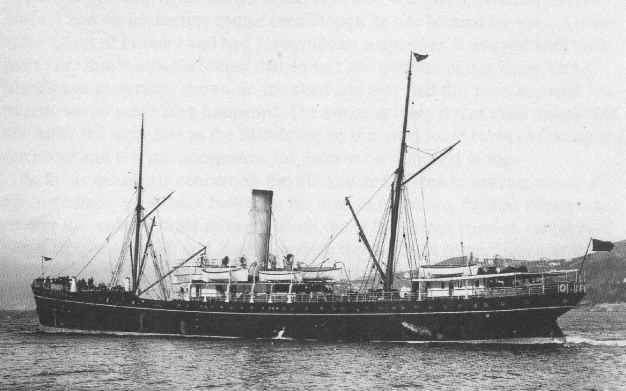 The s.s. Elingamite was a British schooner-rigged steamship of 2.585 tons and registered in Australia. She was engaged in the passenger trade between Australia and New Zealand and on the 5th November, 1902, the vessel left Sydney with 136 passengers: 64 saloon, 72 steerage, and a ship's' company of 58, making in all 194 souls.

The New Zealand pilot mentions the fact, and the charts indicate it. The master could not rely on his log to indicate the distance run, and he could see no land, light, or mark, by which to ascertain his position.

One means he had of averting disaster and that was by sounding. If less than 100 fathoms was found, he would know he was in danger, he could then feel his way, and his chart would enable him to estimate the degree of danger.

He had on board Sir William Thompson's patent sounding apparatus, and he says he gave orders for it to be prepared, intending to use it at 11 a.m. He did not use it, and the disaster to his ship was the result.

He was making for a passage between the Kings and the mainland, which is 15 miles in width, if calculated on an area of safe water.

After 10 a.m. the fog thickened until the master says he could not see more than two lengths ahead, and some of the seamen, and the look-out man in particular, give a much less distance.

Some seconds before the look-out man saw the danger, the master, from his place on the bridge, saw breakers on the port bow, and at once rang the telegraph for "full speed astern," and then the look-out called out "Breakers ahead" and rang his bell.

The wheel was put "hard-a-port." The order to the engine room was repeated from below, the engines stopped but did not reverse. The master repeated the order more than once, but no movement came from the engines, and then the 3rd engineer who was sent for the purpose by the chief engineer, came on the bridge, and informed the master that the engines would not work.

The master then said, with truth, that it was too late; the vessel was then on the rocks ahead, and also broadside on to rocks a-port. Not more than two minutes would elapse from the time the danger was discovered until the vessel struck bow on.

He ordered the boats to be got out, and told the chief steward to provision them as well as he could. The passengers, assisted by stewards and stewardesses, put on life belts, and there seems to have been no deficiency in the number of belts required, either by passengers or crew.

The stewards and stewardesses did their duty well. Naturally, there would be some confusion, or seeming confusion, when 136 passengers were obtaining and fastening on lifebelts, but no panic, or even disorder, appears to have taken place.

There were six boats and two rafts, and the fate of each must be traced. No. 1 Boat, the starboard forward lifeboat, capable of carrying fifty people, was lowered amid a good deal of confusion; the life line fouled, the falls acted imperfectly, and the disengaging gear did not work.

After smashing against the side of the ship for some time, the falls were eventually cut, and some 23 people, including six children, got into the boat, and Captain Reid, an experienced seaman, who was a passenger in the ship, took charge of the boat, under the master's authority, and immediately pulled off to find a landing on one of the islands.

Captain Reid says he wanted others, especially men, to come with him in the boat, but the master ordered him away. This was a most regrettable error of judgment. Before so large a boat should have left the ship, only half filled with people, it should have been ascertained what other boats were available for those people left on board.

The boat left the ship in a dense fog, without a compass or provisions, and the reason given for not putting compasses into the boats could not have applied at this time to No. 1. The compasses were in a box on the bridge, and could have been obtained.

There was a dense fog prevailing at the time, and the chances of finding the wreck again, with or without a compass, were few. Captain Reid had with him in this boat four of the ship's company, six male and seven female passengers, and six children.

It is doubtful if any of the port boats could be launched, and, as it turned out, it was a fatal mistake to send or take a large boat away from the ship half loaded. Captain Reid and his party effected a landing about 4 p.m. that afternoon, and were soon joined by No. 5 boat (the dingey) and No. 3.

They were too exhausted to make any attempt to return to the wreck that afternoon, or to look for the rafts they knew were somewhere near, but at 4 a.m. the next morning an attempt was made, but was unsuccessful, and after being out till 8.30 p.m. on Monday night without food, they managed to effect a landing on the Big King, and were rescued by the s.s. Zealandia on Tuesday morning.

The steamer carried bullion to the value of £17,320, for the bank of New Zealand, a consignment of 52 boxes of coins for banks in New Zealand, including 6,000 gold half-sovereigns.

After three unsuccessful attempts a salvage party succeeded in securing some of the gold.

On January 11, 1907, Captain Willis, who was in charge of the party, reported to Lloyd's agents at Auckland that £1,500 of the gold had been recovered.

The diver, E. G. Harper, employed in the search for the bullion, died of heart failure on January 22 after making three descents. Further attempts were made.