A burnt steamer on the Mississippi 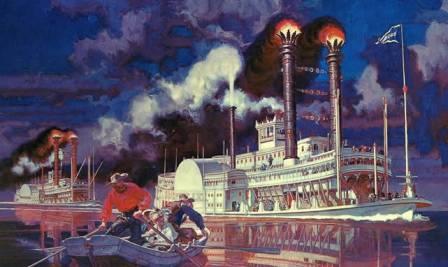 On the day before Christmas, 1863, Major Theodore D. Greenawalt, paymaster in the U. S. Army, came from Harrisburg...

The steamer "Ruth", captain Pegram, bound for Helena, left Cairo on the Mississippi, on the evening of the 4th of August, 1863; Major Grenawalt had been ordered to Memphis, Tennessee, to join the steamboat with eight other paymasters with their clerks. about 200 passengers got also on board, 100 heads of fat cattle, 122 mules and $2,600,000 in greenbacks with which general Grant's army was to be paid. thirty-one soldiers of the Ninth Wisconsin Regiment were on board to guard the treasure. 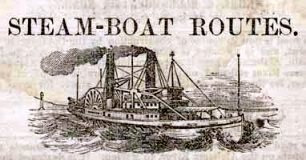 About an hour after the vessel started, about twelve miles below Cairo, at midnight; a fire was discovered near the stern, and in a short time the flames had got the complete mastery.

The captain ordered to head for the shore, and she ran aground with considerable force, some thirty feet of the stern being broken off by the shock. A rush was made for the shore by all on board, except five soldiers left in charge of the money. before all could leap off, the boat recoiled from shore, one wheel still going, and shot out into the stream.

Five of the Ninth Winsconsin and several passengers, all the cattle, mules, money; freight, coloured chambermaid, one of the clerk, the son of Mr. Oglesby, Major Grenawalt and three other paymasters's clerks were known to be on board.

The flamescracked and spread; cattle and mules broke loose and jumped overboard or snorted frantically about, rendered insane by flames and heat. Some passengers swam ashore, one with his trunk, and others, nearly naked, swam into the stream, seeming almost insane, and were carried under and lost...

Soon the wreck sank and her seething fires were quenched in deep waters. Altogether there are about thirty lives los, 400 tons commissary and suttler's stores, and about 100 tons of private freight were engulfed. The soldiers are said to have acted heroically and to have stood by the boxes  containing the money until it was certain all was consumed. The boxes were iron-bound and too heavy to be removed.

There is no satisfactory theory as to how the fire originated; it is believed however, to have been fired by an incendiary in the interests of the Confederate Government. An effort was made to fire the naval depot at Cairo on the previous night... 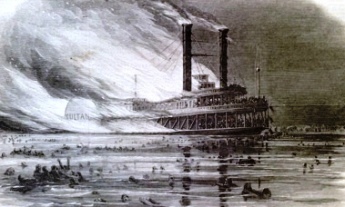 "Greenbacks" or some gold too lost in the Mississippi ?