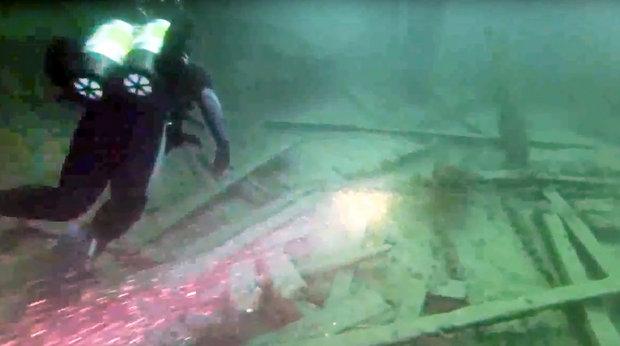 By Zachary Lewis - The Plain Dealer

Cleveland's museums don't house all the city's treasures. Plenty of other great artifacts lie in Lake Erie, just waiting to be beheld.

Beneath the surface, in some cases just so, and often not far from Cleveland ports, sit any number of fascinating old shipwrecks, victims of Erie's violent and unpredictable temperament.

All one needs to interact with them are the right training, equipment and interest. Neither is Lake Erie the only such sanctuary. All the Great Lakes, including those adjacent to Erie, are home to underwater ruins, many of them well over a century old, making of Northern Ohio and the Upper Midwest a kind of playground for the amateur wreck diver.

Intrigued by this portal to history, I've spent the last few years obtaining the proper certification and gear to scuba-dive in the Great Lakes.

Now that effort is paying off. In the last two months, I've visited four separate wrecks and come away from each with what I hope are fascinating images and memories.

Around this time of year in 1864, while the Civil War was still raging, a novice captain on Lake Erie ignored warnings and made the foolhardy choice to press onward out of Cleveland in a storm.

He ended up paying the ultimate price. Six lives, including his own, were lost that September day, when his ship laden with huge grindstones listed and sank in tumultuous waters roughly a mile off-shore, well within sight of what is today Burke Lakefront Airport.

The Sultan was my intro to wreck diving. Resting in just 35 feet of water a quick boat ride out of the Flats, it's relatively shallow and easy to visit and navigate.

All one needs to dive it are basic open-water certification and conditions clear enough to make its features visible. A small buoy marks its location on the surface, and to find it, a diver simply follows a line down to a nearby anchor.