Treasures from a watery grave 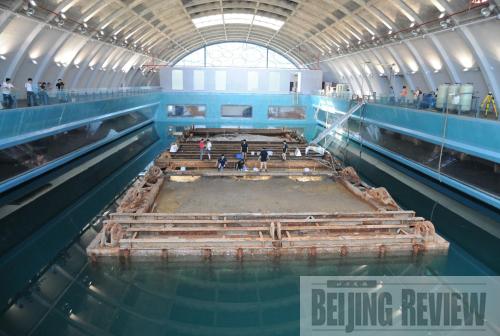 The first probing of the ancient merchant vessel Nanhai No.1 after the wreck was put into a museum pool of simulated seawater successfully recovered porcelain and stone artifacts from its cabin on September 27.

Archaeologists said the more than 200 precious porcelain artifacts found on the 800-year-old ship were produced by some of China's best kilns operating at that time.

First discovered at the sea bottom 18 nautical miles off the coast in the South China Sea, known as Nanhai, in 1987, the 30-meter-long wrecked ship is believed by Chinese archaeologists to be one of the largest and best-preserved ancient vessels in the world.

Archaeologists salvaged the wreck and its surrounding silt with an iron container and hoisted it from its watery grave in December 2007.

The container was dragged ashore to a museum that was built specifically to exhibit the ship in the coastal city of Yangjiang.

The find was put into a pool that allows scientists to control the water temperature, pressure and other conditions to replicate the sea floor upon which the ship rested for centuries.

The creative salvage operation attracted enormous media coverage and was praised as a significant archaeological expedition for China.