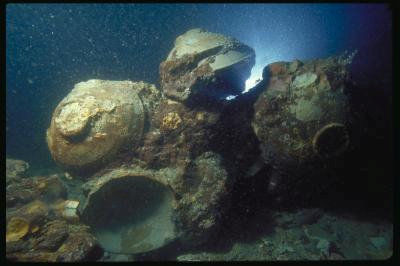 An 800-year-old ’Made in China' label has revealed the lost history of a shipwreck and its cargo. The ship sank in the Java Sea, off the coast of Indonesia, hundreds of years ago, and the wooden hull disintegrated over time, leaving only a treasure trove of cargo.

The mystery ship had been carrying thousands of ceramics and luxury goods for trade, and they remained on the ocean floor until the 1980s when the wreck was discovered by fishermen.

Since then, archaeologists have been studying artefacts retrieved from the shipwreck to piece together where the ship was from and when it departed.

And findings published in the Journal of Archaeological Science: Reports, reveal how the equivalent of a 'Made in China' label on a piece of pottery helped researchers reevaluate when the ship went down and how it fits in with China's history.

Study lead author Doctor Lisa Niziolek, an archaeologist at the Field Museum in Chicago, said: "Initial investigations in the 1990s dated the shipwreck to the mid- to late 13th Century, but we've found evidence that it's probably a century older than that.

"Eight hundred years ago, someone put a label on these ceramics that essentially says 'Made in China' - because of the particular place mentioned, we're able to date this shipwreck better."