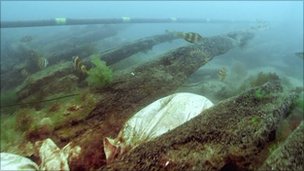 Marine archaeologists are in a race against time to preserve parts of a shipwreck they believe is the most significant found in British waters since the Tudor ship, the Mary Rose. Paul Rose, explorer, diver and presenter of Britain's Secret Seas, visited the site.

"We've watched it fall apart in front of our eyes for five years," said Dave Parham, senior lecturer in marine archaeology at Bournemouth University. "But you can only do one thing at a time."

It was found in 7-9m of water on a sand and shingle seabed on the edge of Hook Sands near Poole Harbour in Dorset in March 1990, when a Dutch dredger hit it.

It was left for almost 15 years until an assessment for English Heritage in 2005 found it was a much more significant site than first thought.

But the archaeologists say the wreck is disappearing as sediment, which protects the ship, has been eroding so quickly that parts of the structure are exposed and decay before they can be recorded.

Divers from Britain's Secret Seas were the first team apart from the archaeologists working underwater, to see and film this beautiful piece of history.