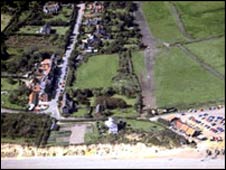 A medieval church which tumbled from an eroding cliff into the sea has been rediscovered by marine archaeologists.

They believe the ruins they have found are St John's church, the biggest in Dunwich which was lost to the sea off the coast of Suffolk.

Dunwich was once a thriving community before being swallowed up by the North Sea more than 500 years ago.

Experts are using the latest acoustic imaging technology to uncover clues about the lost city in the North Sea.

Stuart Bacon, director of Suffolk Underwater Studies, said: "We've found the ruins of a medieval church called St John's, which was the biggest in Dunwich.