Bronze Age boats discovered at a quarry in Whittlesey 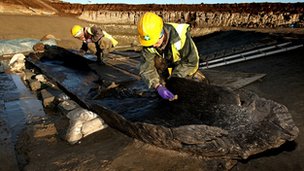 Bronze Age boats, spears and clothing dating back 3,000 years and described as the "finds of a lifetime" have been discovered near Peterborough.

Archaeologists from the University of Cambridge have unearthed hundreds of items at a quarry in Whittlesey.

The objects, discovered at one of the most significant Bronze Age sites in Britain, have been perfectly preserved in peat and silt.

It is thought the settlement burned down in about 800 BC.

David Gibson, project manager for the excavation, said: "It is giving us a 3-D vision of this community that we only see very rarely in the world, let alone in this country."

Ropes, buckets and wooden spoons as well as swords and spears with their handles intact have been found at the site, which lies along the old course of the River Nene.

Six boats hollowed from the trunk of an oak tree, some with extensive carvings, have also been discovered on the site.

'Finds of a lifetime' The boats were discovered three metres below the modern-day surface. It is thought the community would have lived on the river, fishing for perch, pike and eels.

The remains of a nettle stew have been discovered in a wooden bowl.