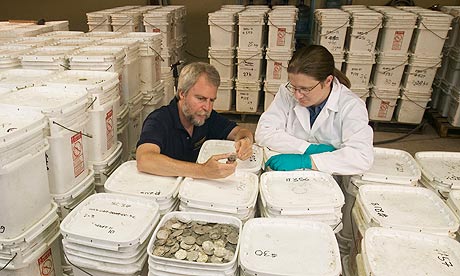 US officials offered to help Spain claim an undersea treasure haul of gold and silver coins discovered by a controversial American exploration company in return for Spanish assistance in the recovery of valuable art looted by nazi Germany, according to embassy cables released by WikiLeaks.

In a conversation with the Spanish culture minister, César Antonio Molina, the US ambassador in Madrid, Eduardo Aguirre, sought to tie the treasure found off the Iberian peninsula by Odyssey together with attempts by an American citizen, Claude Cassirer, to recover a painting by Camille Pisarro that hangs in a Madrid museum.

"The ambassador noted also that while the Odyssey and Cassirer claim were on separate legal tracks, it was in both governments' interest to avail themselves of whatever margin for manouevre they had, consistent with their legal obligations, to resolve both matters in a way that favoured the bilateral relationship," the embassy reported in a cable on 2 July 2008.

The offer was made after the Spanish government claimed ownership of half a million gold and silver coins found on the floor of the Atlantic Ocean by Odyssey's underwater robots.

The company had provoked Spanish fury by landing the treasure at Gibraltar and flying it straight to the US.

The so-called Black Swan treasure, which Odyssey said came from an unidentified shipwreck, had been valued at about $500m.

Molina refused to tie the Odyssey case to the Pisarro painting, according to the embassy. "The minister listened carefully to the ambassador's message, but he put the accent on the separateness of the issues," the cable reported.

He promised, nevertheless, to meet Cassirer to discuss what could be done about the painting, Pisarro's Rue St Honoré. Après-midi. Effet de Pluie, which currently hangs in the Thyssen-Bornemisza museum in Madrid.

In another cable the embassy explained the background to Cassirer's claim. "The Nazis forced Mr Cassirer's grandmother to sell the painting in 1939. Baron Hans Heinrich Thyssen-Bornemisza acquired it in 1976.

In the early 1990s, the Spanish government purchased the collection and built the current museum. In 1958, Mrs Cassirer received a DM120,000 restitution payment for the disappearance and provisional dispossession of the painting, but retained full right to the painting."

The museum has refused to hand over the artwork, claiming that it was bought in good faith. Baron Thyssen had not known the story of Lilly Cassirer, a wealthy German Jew who said she was forced to sell the picture for 900 marks (about $360).

She said it was the only way she could obtain an exit visa from Germany as Nazi oppression of the Jews escalated.

The painting of a rain-soaked Paris boulevard had hung on the walls of the family's Berlin and Munich homes since the impressionist painted it in 1897.