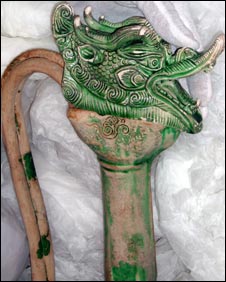 
Simon Worrall explains why a recent discovery on the seabed of the Indian Ocean will revolutionise our understanding of two ancient civilisations.

"The local fishermen believe that there are underwater spirits guarding the wrecks," says Tilman Walterfang, as our boatman picks his way through a maze of coral reefs and submerged rocks.

"Sometimes, they perform prayers on the boats, sacrificing a goat, spreading the blood everywhere, to keep the vessel safe."

I am on a fishing boat in the Gaspar Strait, near Belitung Island, off the south-east coast of Sumatra. Since time immemorial, this funnel-shaped passage linking the Java Sea and the Indian Ocean has been one of the two main shipping routes.

The Malacca Straits is the other, from China to the West.

A British sea captain, shipwrecked here in 1817, called it "the most dangerous area between China and London"