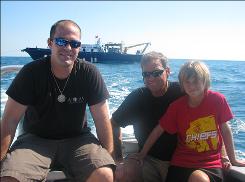 In 1622, Spanish galleons loaded with gold, silver, pearls and other treasure sank off Florida's coast after being hit by a hurricane. Around 1969, Mel Fisher began his search for that booty – and in the time since, a multitude of family members have joined the hunt.

For more than 16 years, the Fishers made limited progress. They found artifacts such as gold bars, silver coins and ornate jewelry as they explored miles of underwater turf, but they were often disappointed in their search for the huge treasure that went down with the galleon Nuestra Señora de Atocha.

The estimated value: more than $400 million. A year later, divers found hundreds of emeralds that had been smuggled on the Atocha. As of last month, they were still salvaging treasure from that ship, as well as La Santa Margarita, which also sank in the storm.

While work offers a "fun, romantic adventure with the possibility of hitting it big," Sean, Mel's grandson, stresses it's still a business where persistence is key.

"It gets monotonous and frustrating. We'll go months without finding anything."