Former NBA team owner on his passion for dead pirates 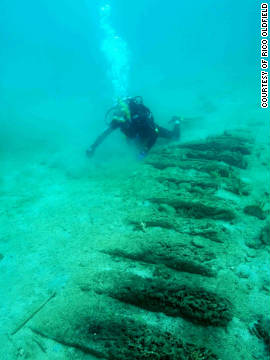 Pat Croce is a man on a mission -- a mission to find his all time favorite pirate.

The highly successful businessman, who rose from being a trainer in the locker room to president of one of the most storied franchises of the NBA, is on a quest to find the body of English explorer Sir Francis Drake, who was buried out at sea more than 400 years ago.

Sir Francis Drake was an adventurer and a true pirate of the 16th century. Drake is credited with being the first Englishman to circumnavigate the globe. He led several voyages, many of them aimed at capturing Spanish territories and taking their treasure. While he made enemies with Spain, he enchanted Queen Elizabeth I, who is believed to have fondly called him "my pirate".

But the Spanish got their revenge. Drake's voyage to the West Indies was disastrous, with the Spanish fleets prepared for the English. The adventure was to be his last and in 1596 he fell ill with dysentery. Dressed in armor, Drake's body was placed in a lead casket and thrown overboard off the coast of Panama. Days later two ships in the fleet were scuttled nearby, ensuring they wouldn't get into the hands of Drake's enemy, the Spanish.

Now, centuries after he was laid to rest, Croce is on a quest to locate Drake's coffin. "I'm a businessman with a passion for pirates and I'm all about taking action on your passion," Croce enthuses.

Croce has invested a great deal of time and money -- somewhere in the region of hundreds of thousands of dollars according to some experts -- into finding Drake's final resting place. Last month he had a major breakthrough.

Armed with high-tech equipment, a team of archeologists and divers and using the information given to him by a researcher he has hired -- Croce set about combing the seabed in an area off the Panama coast. What they came across Croce describes as a tremendous find.

They uncovered two ships that appeared to be burnt out, lying perpendicular to one another, in an area which Croce now likes to call 'Drake's alcove'. They didn't find a name on either ships, or the ships' bells, yet Croce and experts are quite convinced the ships are the "Delight" and "Elizabeth" -- the two ships in Drake's final voyage that were scuttled.