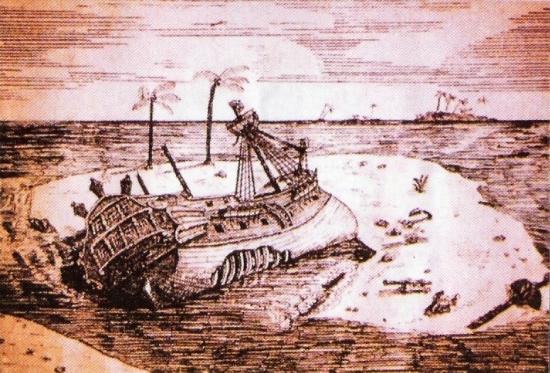 In the lore surrounding hidden treasures, the gods often see fit to subject the treasure hunter to a long quest before he finds the objects of his desire.

Treasure hunter Klaus Keppler knows that only too well. For years, the owner of a salvage company has been looking for the wrecks of ships that had been carrying gold, silver or china. Now, after a long dry spell, he got lucky. Twice.

Keppler - who has recovered a 10th-century wreck and the Forbes, a British vessel that ran aground in 1806, off Indonesia - contentedly surveys his treasures in a Jakarta port storehouse, holding up a huge lump of silver coins.

'Hurry up, this thing is incredibly heavy,' the 70-year-old German urges a photographer but with a big smile on his face.

The divers of his salvage ship, the Maruta Jaya, have recovered many kilograms of silver coins from the Forbes as well as cannon, gold jewellery, crystal, silverware and 400 bottles of wine.

'Those gentlemen on board knew how to live well,' he says.

Especially the many different coins will sell well, he believes, spinning a large one between his fingers: 'One coin can be worth between 50 dollars and several thousand.'