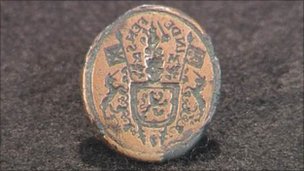 Investors who helped bankroll a salvage expedition to recover sunken gold off the coast of Anglesey claim they were misled by the project leader.

Veteran diver Joe McCormack sought the cash after finding what he claimed was evidence of a wrecked galleon intended for Bonnie Prince Charlie in 1746.

But his salvage bid was stopped in late 2009 after running out of money - without unearthing any gold.

Mr McCormack said investors who spoke to the BBC had "an axe to grind".

The BBC's Inside Out North West programme has spoken to 10 investors who funded the ill-fated excavation project who feel they have been misled in some way.

Richard Holland, a doctor of genetics from Southport, put money in and convinced nine other friends and family to do the same, making a total investment of £70,000.

"We've been lied to... not just me, there's a lot of people been told the same story.

"I feel very bitter about it. I feel very embarrassed by it, embarrassed because I've introduced some of my friends into it and I feel bitterly sorry that I've done that and I'm more than angry at Joe McCormack."