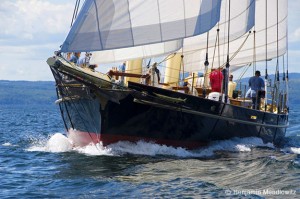 LookTV has produced a new film chronicling a voyage of archeological discovery by Bermuda Middle School students who helped to identify a previously unknown shipwreck in Castle Harbour.

“Reefs, Wrecks and Renegades: A Voyage of Discovery Aboard the ‘Spirit of Bermuda’,” captures an exciting interdisciplinary education initiative which was a collaborative project between Bermuda Sloop Foundation and National Museum of Bermuda. It also involved the Bermuda Institute of Ocean Sciences, the Custodian of Wrecks from the Department of Conservation Services and 500 local Middle 3 school students.

During the 2009/2010 academic school year, all Middle 3 students attending Government supported Middle Schools, and a number of those attending local private schools, participated in a five-day learning expedition aboard the sail training vessel “Spirit of Bermuda”.

While aboard, the students were engaged in the authentic process of registering, surveying and documenting a previously unexplored shipwreck located in the shallow waters of Castle Harbour, near Nonsuch Island.

The film produced by LookBermuda, follows the students on their voyage as they apply for a license to explore the wreck from the Historic Wrecks Authority, seek environmental advice, survey and dredge the wreck and attempt to figure out the ship’s identity.