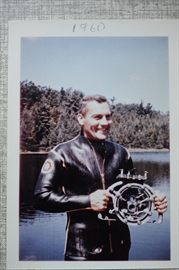 By Valerie Hill - The Record

Suffering through a slow recovery from hip replacement surgery, 86-year old Jack Youngblut is confined to an easy chair where he wiles away his time reflecting on a remarkable life.

"I started diving in 1958, and once you start diving, you always want to do something better," said Youngblut, an award-winning underwater photographer and one of the founding members of the now defunct Trident Diving Club in Kitchener.

The film was one of the first to use underwater colour cinematography and went on to win several prestigious awards — including an Oscar. Scuba, particularly underwater photography, was virgin territory.

Don Wilkes, retired manager of Fathom Five National Marine Park and the Bruce Peninsula National Park, has known Youngblut for years and calls him "one of the grandfathers of scuba diving in Ontario.

"He built his own split lens camera in 1960 when scuba diving was new." The lens allowed Youngblut to shoot photos above and below the water's surface simultaneously.

Youngblut was on the cutting edge of an activity that had, up to then, been confined to the military. Much changed after National Geographic magazine ran an article in 1953 about Cousteau's underwater archeology near Marseille.

The public suddenly started demanding diving gear. Around the same time the term SCUBA was coined, an acronym for "self-contained underwater breathing apparatus."

Youngblut recalls those days with nostalgia — the excitement of doing something few others attempted and the fun of building equipment that wasn't available, including a housing for his underwater camera and the camera itself. But his experiences weren't always fun.

"We dove for the police, like once when a child drowned in a gravel pit," he said, the image of that dive near Waterloo still vivid.