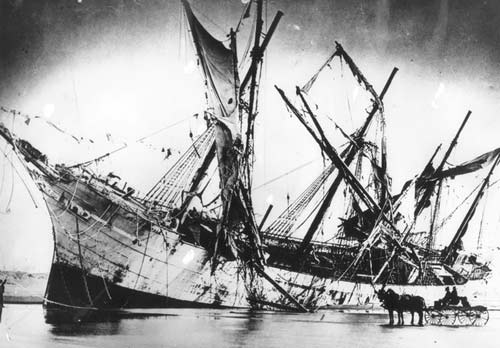 115 years ago today – October 26, 1906 – that the news of this dramatic stranding hit the world, starting with the Morning Astorian's first edition of that day. According to their reports – and plenty of subsequent historical accounts – those wee hours of the morning of October 25 were stormy and raucous.

The four-masted Peter Iredale was on her way into the mouth of the Columbia River after coming from Mexico, a British-based ship made mostly of steel. This was her ninth time coming into town, according to the rather tedious logs of incoming ships that were routinely published in newspapers at the time.

It was at 2 a.m. that Captain H. Lawrence first saw the lights of Astoria, but due to the gale and windstorm swirling around them this view flickered in front of him, making it an uneasy route in.

Lawrence stuck to his training and decided to wait until daylight to try and enter, however the wild conditions caused him and the crew to lose their bearings in the night and with just a few moments notice they found themselves about to ground on the beach.

One crew member screamed “breakers dead ahead” from a lookout, and Lawrence immediately gave the order to steer the ship away. In these conditions, the wheel wouldn't work properly and within minutes the crew was struck with horror at the sound of the boards beneath their feet grinding onto land.

The jolt was gargantuan: everything onboard went flying the direction of the stop. The masts snapped off with the enormous force, and even the anchors and chains mysteriously went flying off the ship, later found quite a ways away.