Shipwrecks from WWI and the Spanish Armada 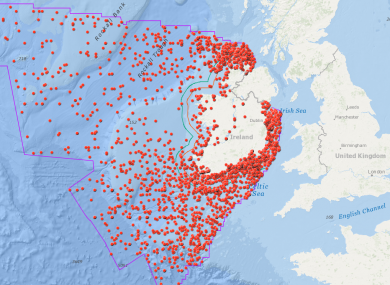 A host of historically significant vessels are among the thousands of shipwrecks that can be found on a new interactive map that was launched this week.

The ‘Wreck Viewer’ features exact locations for around 4,000 recorded wrecks, while information on an additional 14,000, whose location has not been fully confirmed, is also available to download.

The oldest wrecks on the map are logboats found in inland lakes and rivers, many of which date back into prehistory.

A recently recorded logboat from Lough Corrib has been dated to 1100 BC. Six Spanish Armada wrecks from the attempted invasion of England in 1588 were successfully identified and plotted.

They are La Trinidad Valencera (Kinnagoe Bay, Donegal), La Juliana, Lavia and Santa María de Visón (Streedagh, Co Sligo), Santa Maria de La Rosa (Blasket sound, Co Kerry) and the Girona (Antrim). You can scout around and try to find the ships of your own accord or even use the handy search function to locate a particular wreck you are looking for.

A spokesperson for the Department of Culture, Heritage and the Gaeltacht said the map has generated a lot of interest since it was launched on Wednesday.

“Because of the international dimension to many of the vessels wrecked in Irish waters there has also been a strong interest from abroad,” the spokesperson said.