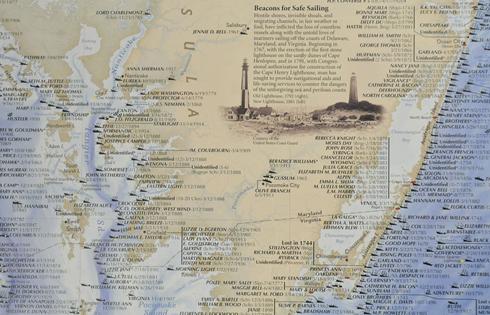 For Don Shomette, coastal waterways in the Delaware, Maryland and Virginia region offer a treasure trove of history beneath the waves.

"In the Chesapeake, there are a total of eight sunken fleets," he said. "It's the most fought-over body of water in the Western Hemisphere."

The Delaware Bay is a close second, Shomette said.

Now, at least part of that history is being told in a map of the Shipwrecks of Delmarva, commissioned by Delaware Bay.

Shomette, who's written volumes about nautical history, was tasked with culling the 7,000 known shipwrecks to the 2,200 featured ones on the map. Based on predictive modeling, he said between 10,000 and 12,000 wrecks are believed to lie on or beneath the sea floor.

"It was an embarrassment of riches," he said. "There were so many important sites, and a number of them couldn't be included."

The latest map follows a similar one of the Outer Banks of North Carolina, issued in the 1970s. That map can still be found in bait shops, hobby stores and museum gift shops across the country, Shomette said.

But Delmarva's waterways rival — and possibly surpass — the Outer Banks as the "graveyard of lost ships," he said.

The process of selecting the sites to be included took more than a year, Shomette said.

He and cartographer Robert Pratt made the selections based on cultural and historical relevance, as well as diversity. Revolutionary War-era privateers exist alongside 1850s paddle steamers, Navy submarines and modern pleasure cruisers.

"We didn't want to put every work boat and every barge — even though some of them are enormous in size — in there," Shomette said.

Assembling the list meant pulling from his life's work: decades spent poring over government documents, letters and old newspapers, determining the location and details of wrecks across the region.