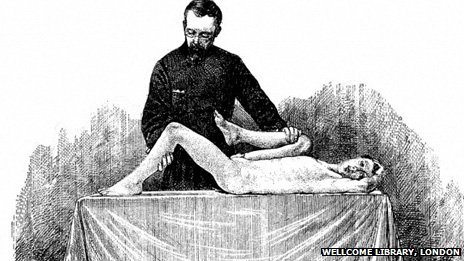 By Neil Prior - BBC News

DNA mapping has shed light on a 260-year-old mystery of the origins of a child shipwrecked on Anglesey, who helped shape medical history.

The boy of seven or eight, who could not speak English or Welsh, washed up on the north Wales coast with his brother between 1743 and 1745. Named Evan Thomas, he was adopted by a doctor and went on to show bone setting skills never seen before in the UK.

Now a DNA study has revealed he came from the Caucasus Mountains.

The boys' dark skin and foreign language led people to believe they were Spanish - a myth which went on for hundreds of years.

Evan's brother survived only a few days, but he went on to demonstrate he already possessed bone setting skills, including the first recorded use in Britain of traction and splints to pull apart the over-lapping edges of breaks and immobilise limbs while healing took place.

Analysis of DNA from the 13th generation of Evan's descendants is now indicating that the brothers came from an area of the Caucasus Mountains, including Georgia, Ossetia and Southern Russia.

Anglesey bone setter DNA project director John Rowlands said: "When we embarked on the project, all the historical evidence seemed to point to Spain as being the most likely origins of Evan Thomas.

"Not only was there his exotic appearance and language, but also the fact that many Spanish ships were sailing past Wales at the time of the shipwreck, in order to supply troops in support of the Jacobite rebellion in Scotland.

"But early on in the analysis we were able to rule out British or Spanish descent, and now, after studying 300 gigabytes of data, our team at Edinburgh University have found 48 out of 51 points of similarity with DNA originating in the Caucasus.