Around Africa in a Phoenician boat 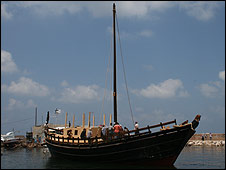 
On Arwad Island off the coast of Syria, a group of 20 sailors-to-be are preparing for a voyage their captain believes has not been undertaken for two and a half millennia.

They plan to set off on Sunday on a journey that attempts to replicate what the Greek historian Herodotus mentions as the first circumnavigation of Africa in about 600BC.

Their vessel, the small, pine-wood Phoenicia, is modelled on the type of ship the Phoenician sailors he credited with the landmark voyage would have used.

The Phoenicians lived in areas of modern-day Lebanon, Syria and other parts of the Mediterranean from about 1200BC and are widely credited with being both strong seafarers and the first civilisation to make extensive use of an alphabet.