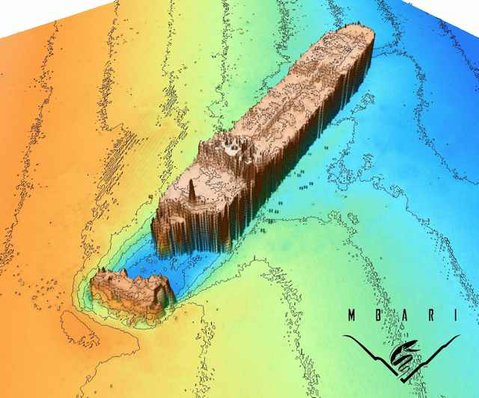 Researchers hope to use sonar images of the SS Montebello to determine if the sunken vessel could leak oil.

The Montebello Assessment Task Force sent a robotic submersible down to the wreck — which lies seven miles off California’s coast, near Cambria — last week.

The vessel’s tanks are presumed to still contain the three million gallons of Santa Maria crude oil that were loaded before its departure in December 1941.

The SS Montebello lies at a depth of approximately 900 feet. It sunk after being torpedoed by an Imperial Japanese submarine.

Kim Fulton-Bennett of the Monterey Bay Aquarium Research Institute (MBARI) said, “When the ship was sunk by the Japanese submarine, you might have expected the oil to leak out, as the whole bow of the ship fell off.”

However, according to Fulton-Bennett, neither the rescued sailors nor their rescuers reported any signs of oil leakage.

The second question, as Fulton-Bennett put it, regards the state of the oil if it does in fact remain in the ship’s tanks. It may be that the oil solidified over time and doesn’t threaten to leak out, but it is difficult to accurately predict whether this is the case.

The Montebello Assessment Task force was commissioned in 2008 by California Assemblymember Sam Blakeslee after he read an article on the sunken ship. The Task Force will work to identify all environmental issues resulting from the wreckage.

It includes representatives from MBARI, the Office of Spill Prevention and Response, the U.S. Coast Guard, and Caltrans.

The MBARI’s robotic submersible — commissioned by the Task Force to investigate the wreckage — embarked on a three-day mission and gathered data using three different types of sonar.

This allowed researchers to build a full 3-D picture of the shipwreck’s external condition and layout, and of the sea floor’s rock densities.