River Foyle wreck a 'sonar illusion' rather than submarine 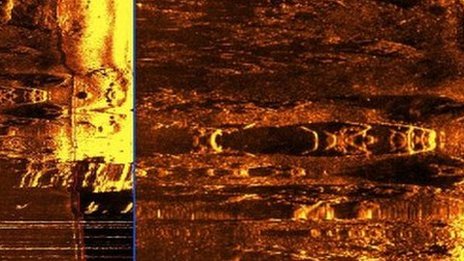 A mystery object in the River Foyle thought to be a submarine or U-boat has turned out to be nothing more than an illusion, Environment Minister Alex Attwood has said.

Royal Navy divers were brought in to examine the area, and Mr Attwood said there was a "thrilling possibility of something significant" but the news is disappointing.

"The experts now conclude that while there is something lying there, it's not a vessel or a sub or anything of significance," he said.

"The reason why the original sonar photograph looked like a vessel was that an illusion was created when the sonar scoped out the site.

"In turning around at the site, it exaggerated and enlarged what is lying on the sea-bed."

Mr Attwood said the object is made of metal but it is not a vessel.

Some people had speculated that the wreck could be a German U-boat, as at the end of the war, Nazi submarines surrendered in the Foyle from where they were taken out to sea and destroyed or sunk.

Others believed it is unlikely to be a full-sized submarine, suggesting it could be a British two-man mini submarine - known as an X craft.

Another theory was that it could have been a small boat or even a private yacht, as one is known to have sunk in the area many years ago.