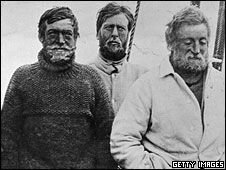 After a century buried in the Antarctic ice, a rare batch of whiskey which belonged to the polar explorer Sir Ernest Shackleton is to be recovered. So what might it taste like ?

It's been on the rocks for the last 100 years, buried under two feet of ice at the South Pole. Now the two cases of "Rare Old" brand Mackinlay and Co whisky are to be retrieved.

A team of New Zealand explorers heading out in January have been asked by Whyte & Mackay, the company that now owns Mackinlay and Co, to get a sample of the drink. The crates were left behind by Sir Ernest Shackleton when he abandoned his polar mission in 1909.