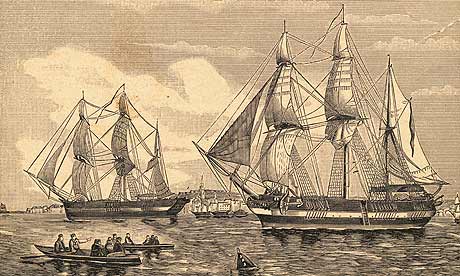 By Maev Kennedy - The Guardian

A few snippets of copper may be a vital clue towards solving one of Arctic exploration's most haunting mysteries: what happened to Sir John Franklin's two superbly equipped ships when he and all 150 members of his expedition died in the search for the North-West Passage more than 160 years ago?

The fate of the 1845 expedition haunted Victorian imagination, and accounts suggesting some of his starving men prolonged their lives by cannibalism destroyed the reputation of those sent to find them.

Expensive rescue expeditions continued for almost 20 years, spurred on by Franklin's formidable widow, Jane Griffin. Evidence confirming Franklin's death was only discovered in 1859. Dumped supplies were recovered along with personal possessions, letters describing his death and those of many of his senior officers, and finally bodies, but his twin ships – the Erebus and the Terror – have never been located.