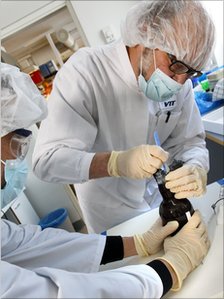 Samples of the world's oldest beer have been taken in a bid to determine its recipe - and brew it again.

In July 2010, a Baltic Sea shipwreck dated between 1800 to 1830 yielded many bottles of what is thought to be the world's oldest champagne.

Five of the bottles later proved to be the oldest drinkable beer yet found.

The local government of the Aland island chain where the wreck was found has now commissioned a scientific study to unpick the beer's original recipe.

Divers found the two-mast ship at a depth of about 50 metres in the Aland archipelago, which stretches between the coasts of Sweden and Finland in the Baltic Sea.

The ship was believed to be making a journey between Copenhagen in Denmark and St Petersburg, then the capital of Russia.

The salvaging operation to bring up 145 champagne bottles - since determined to include vintages from Heidseck, Veuve Clicquot, and Juglar - had one casualty: a bottle that burst open at the surface, revealing itself to be beer.