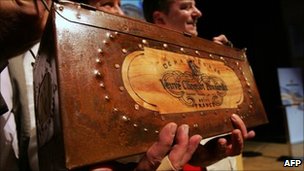 The Veuve Clicquot bubbly was bought by an anonymous bidder from Singapore, auctioneers in Mariehamn said.

The same buyer paid 24,000 euros for another bottle of champagne, which was made by the now defunct Juglar house.

They were found in a shipwreck at the bottom of the Baltic Sea last year.

In all, more than 140 bottles were discovered by divers, and the wine is said to be in "exquisite" condition.

Friday's auction at Acker Merrall & Conditt took place in Mariehamn, the capital of the autonomous Aaland Islands between Finland and Sweden, near to the place where the bottles were found.

"This is an emotional bottle, because this is the wine of Madame Clicquot herself," Veuve Clicquot historian Fabienne Moreau told the AFP news agency, referring to Barbe-Nicole Clicquot Ponsardin - the woman who ran the famous house in the 19th Century.

Experts believe that the booty from the shipwreck dates from about 1825-1830.

The auctioneers said the previous record was set in 2008, when a bottle of 1959 Dom Perignon Rose sold for 27,600 euros. This has not been independently confirmed.

However, Mr Moreau, who had sampled the champagne, said the price "proves the value of the wine and the prestige of the house".