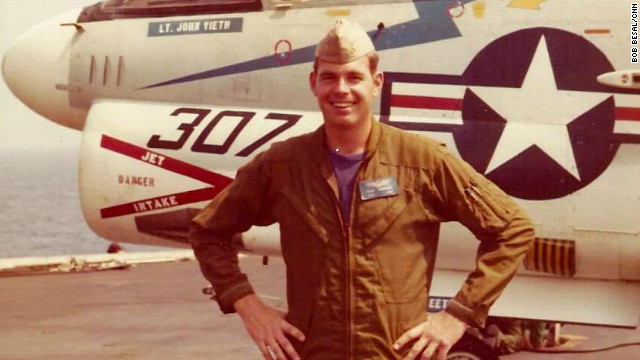 Bob Besal went on a fishing trip this month off the coast of St. Augustine, Florida.

The 62-year-old retired rear admiral, who earned two Distinguished Flying Cross awards and spent a lifetime on the water and above it, didn't catch any fish, but he did return with some memorable souvenirs.

Twenty miles from shore and 80 feet under the Atlantic, parts of Besal's past were brought to the surface.

Nearly 38 years ago, the naval aviator made a critical decision that almost cost him his life and ultimately defined it.

Besal and three other pilots were simulating bombing runs on a training mission when his Vought A-7 Corsair clipped the plane next to him. Besal ejected at a speed close to 350 mph.

The wreckage of Besal's plane was found last month by a team of divers from TISIRI (Think It Sink It Reef It), a Jacksonsville-based marine conservation company that specializes, among other things, in building artificial reefs.

A data plate picked up off the ocean floor was traced back to Besal, who now teaches aviation maintenance technology in Charleston, South Carolina.

Joe Kistel, executive director of TISIRI, asked Besal if he would like to return to the wreckage site, an invitation Besal eagerly accepted.

Just after dawn on a recent Saturday morning, Besal joined a crew for a 90-minute ride to the wreckage site.

Little did he know that the decades-old ruins had become part of a productive ecosystem.