In 1859, several chests of treasure were stolen from a Peruvian church and hidden on a remote Pacific Island. One says it has never been recovered... The inventory of the treasure reads as follow:

The gold was originally mined by the Incas before being plundered by Spanish Jesuit Priests who secreted it in an underground vault at the Jesuit church of Pisco, Peru. There, it remained with the other church treasures, guarded by the priests with total secrecy for over 100 years, until it was loaded onto the "Bosun Bird", a ship hired to transport the treasure to Callao, Lima, in anticipation of a hoax raid by former priest Father Matheo and a gang of rogues.

The skipper of the "Bosun Bird", Diego Alvarez, perpetrator of the hoax, had heard Matheo talk of the horde while they served together in the Peru-Chile war. With three others (Brown, Barrett and Killorain), they hijacked the treasure and disposed of the escort priests. They then sailed for Australia, stopping to hide the gold on a remote inhabited Pacific Island for later recovery.

They hid the treasure on a tiny atoll identified as having a coral pinnacle on its eastern side with a pass into the lagoon just to the left of the pinnacle. About three miles from the pass was a pear shaped pool with seven adjacent coral blocks. The gold ingots were placed in this pool and the jewels wee buried nearby. This Island is one of the coral atolls that make up the Tuamotu archipelago, part of the French Polynesia.

Alvarez and Barett were killed in a brawl shortly after they arrived in Australia, in about 1850. Killorain and Brown were jailed for 20 years for their part in the fight. Brown died in prison, only Killorain the Irishman survived.

On his release he became a tramp, but on his death-bed gave the map of the treasure horde to Charles Edward Howe who had befriended him. Howe spent 13 years digging on the wrong atoll, so convinced was he of the truth of the story, before realizing his error. He was discovered on the Island by Charles Nordhoff a round-the-world adventurer who described the meeting in his book. Howe moved after seeking help from the natives and immediately found the jewels.

Unable to carry  his find, he reburied the chests and probed the pool, recovering slivers of oak chests. He returned to Australia to find backers for another voyage. One of the men recruited was George Hamilton, a diver from London. They obtained permission from the French Government to search for the treasure and checked the facts of Howe's story both in Peru and the Tuamotus.

The church at Pisco had been robbed, the "Bosun Bird" had reached Australia, stopping at Tahiti and Howe had spent years digging for treasure.

In the six years it took to find backers and set up another expedition, Howe disappeared to do some prospecting and was never seen again. Convinced however, they voyaged to Tahiti, hired a schooner and sailed for the Tuamotus.

They found the correct atoll eventually and probed the pool with drills and struck something hard at 6feet below the sand at the bottom of the 12 feet pool that was neither rock nor corral. Hamilton dived time and time again and was attacked by both a giant octopus and a huge moray-eel. Digging the sand by hand was the only way available to them and despite a makeshift cofferdam of corrugated iron, the sans inevitably kept backfilling the hole.

The pool is connected to he sea and it would require more sophisticated methods to excavate the sand and recover the ingots simple thought it seemed. They returned to try and raise the money for another expedition but failed to do so as a writ was issued against the consortium for libel in their absence and backers refused to underwrite the losses. Hamilton wrote of his adventure in a book as he was left penniless but did not name the Island...

Lately, another proposal was written to mount a new expedition
to recover this immense treasure.

Some questions arise : - Is the gold still there ?
- Why could no expedition be successful up to now ?
- How exactly to operate if all expeditions have failed before ?

Answers were given, but the treasure seems to be reluctant to give up its secrets and awaits its lucky discoverers.... 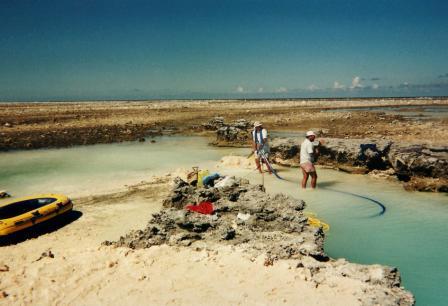 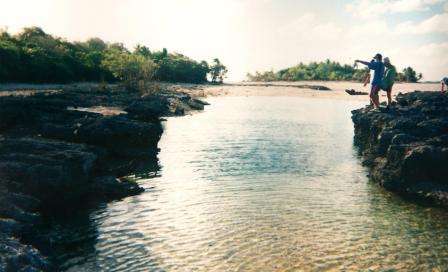 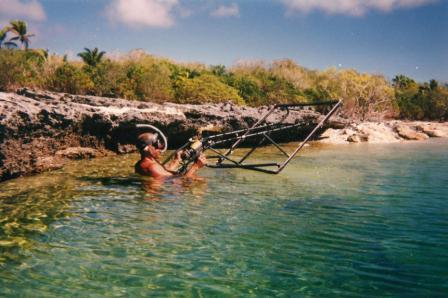 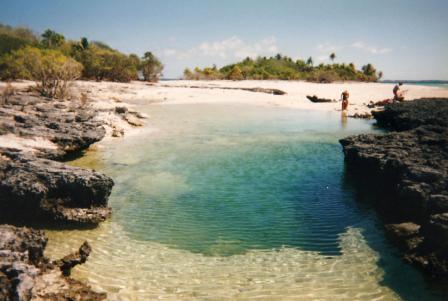