One of the richest wreck ever found...!

When the United States Mail Steamship 'Central America' sank in deep water off the coast of the Carolinas during a monstrous 1857 hurricane, it created just  such an accidental accumulation of treasure.

Bound for New York with 578  passengers and crew, and 38,000 pieces of mail, the Central America also held tons of gold ingots, coins, nuggets, and dust mined from the western gold fields  during a defining quarter-century when the country came of age.

The precious cargo included approximately 5,200 recently-minted $20-  denomination ('Double Eagle') gold pieces produced in 1857  at the San Francisco  Mint. The gold for these coins was mined during the California Gold Rush.

There also was a much smaller quantity of other historic gold coins that circulated in the  Wild West.

The largest ingot recovered is an astonishing gold brick that weighs 933 ounces, nearly 80 pounds, made by assayers Kellogg & Humbert.

@ More about this golden story... 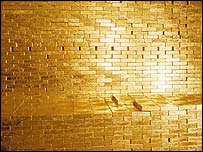