The unsolved lost treasure mystery of the Dorothea

A wealth-laden ship sunk off South Africa may be salvaged.

"To recover more than US$ 3,000,000 in gold, part of the fortune of the late Paul Kruger, once President of the Transvaal, which is believed to be cemented of the hold of the bark Dorothea, sunk off Tenedos Reef, off the coast of Zululand, is one of the projects which may be revived as a result of improvement in the sciences of salvaging sunken ships".

Near Cape Vidal, on the coast of Zululand, lies the wreck of the notorious sailing vessel Dorothea, with a supposed treasure in gold  concealed beneath a flooring of cement.

It was believed for some time that the ill-fated Dorothea was fleeing with the fortune of Paul Kruger on board when she was cast ashore. The evidence goes to show, however, that certain officials of the Transvaal Government, before the Boer War, issued permits to several lawless adventurers, allowing them to engage in buying stolen gold from the mines.

This illicit traffic flourished largely, and so successful was this particular combination that a ship was bought, the Ernestine, and after being overhauled and renamed the Dorothea, she secretly shipped the treasure on board in Delagoa Bay.

Some years ago, a syndicate was organized to attempt its recovery and a government steamer, the Alfred Noble, was sent to do the work of salvage, but failed...

In 1904, The Penguin, a British steamer, left Port Natal at about 6 a.m. on 13th August bound for Delagoa Bay, but her real destination was Cape Vidal on the Zululand coast. She had a crew of 14 hands and a few passengers. She foundered before salvaging any treasure.

"The owners of the Penguin were C. G. Smith and Company, of Smith Street, Durban, and the vessel was chartered by Walter Knox of Durban, who represented a syndicate whose object was to endeavor to recover the treasure believed to be in the Dorothea.

Everything went well until about 9 o'clock p.m., when a strong westerly wind got up with heavy following seas, so much so, that the schooner or large life-boat, which the vessel was towing, overran her tow-rope, and the slack bight getting round her, when it tightened, she capsized, and shortly after broke adrift altogether before this, however, the three men who were on board this boat, succeeded in gaining the deck of the Penguin.

After this mishap to the schooner, the captain slowed down, and put the Penguin's head round to the sea. The captain left the deck about 10 o'clock, his place at the wheel, being taken by the mate.

About 10 minutes after, he heard shouting, and came out. It was then discovered that water was flowing into the engine room, and on further investigation, that the lazarette hatch had been stove in, and the bunker hatches washed off.

These were found floating about the deck. They were replaced, and diver Krening stood on one while the mate endeavored to secure a boat cover over it, but it was too late then, for the air blew it up from below, and the water washed it off from above, and their efforts were vain.

About 10.30 or 11 o'clock, the vessel began to settle down by her stern. The only thing now was to launch the boats. The sea did this for them, one man getting away in an 8-ft. dingy, and reaching the shore early next morning in safety.

Fifteen of the crew and passengers got into the large life-boat belonging to the expedition, after she had floated off the Penguin's deck. These made every effort to keep in touch with the ship and rescue their shipmates, but failed to do so.

When they lost sight of the Penguin her stern was submerged, and there is no reasonable doubt but that she foundered soon after.

The men left on board (ten in all) appear to have failed to secure one of the other boats, and in all human probability, must have gone down with the vessel, as nothing has been heard of them since.

Of the 15 men who got away in the life-boat, 14 effected a landing on the Zululand coast, one, James Jamieson, of Edinburgh, being unfortunately drowned when the boat capsized in the surf.

In consequence of the damaging statements and sensational evidence of one of the witnesses, William Thomson, shipwright to the treasure seeking expedition, and who described the ship as a "deathtrap." and spoke of the absence of hatches over the bunkers, and that there was only a grating over the lazarette hatch, it became necessary to call further evidence to test the correctness or otherwise of this witness's statements..."

Other wrecks of treasure ships lost more than 100 years ago are being located and preparations are being made to bring ingots of precious metals to the surface.

Captain Gardinier, a salvage expert, has located 38 hulls of sunken vessels off the coast of South Africa and believe that 8 of them could be salvaged: 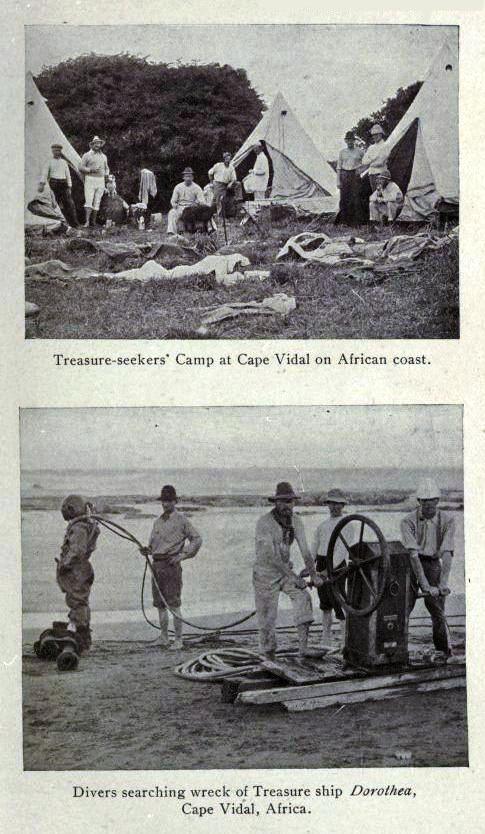