The liner Labrador on the rocks

Total loss of the liner Labrador

The wreck of the "Labrador", 4737 gross tons, a dominion line steamer of 401 feet long, built 1891 at Belfast by Harland and Wolff

On her way from Halifax, calling at St. John's, Newfoundland, on February 18th, 1899, for her final destination Liverpool; with an assorted general cargo of 2000 tons: 20 tons of wood pulp, 1300 barrels of apples, raw furs, grain, 17 horses, bags of mail and 166 passengers, from which F. Agoncillo, agent of the Filipino junta, L.E Prowse, member of parliament for Prince Edward Island.

She went ashore on the Mackenzie Rocks, south of Skerryvore, west coast of Scotland, on the foggy morning of March 1st.

Her first port of call after making the eastern crossing of the Atlantic Ocean was expected to be Moville in County Donegal , Northern Ireland . In the very early hours of the 1 st March 1899, during this thick fog, that captain Erskine estimated that she was off the north coast of Ireland. In fact, the "Labrador" was sixty miles further north than expected, and at 7.00 am a shudder ran throughout the ship, just as the passengers were waking.

As a precautionary measure the eight lifeboats were prepared and lowered. An examination of the holds, tanks, and forepeak took place by the ship’s carpenter and he reported that she was taking in water over her entire length. At this point Captain Erskine decided to abandon ship, and all the passengers and crew took to the lifeboats.

Because of the angle the ship had run aground the passengers had to be lowered into the lifeboats by rope. By the time the first boat, with 12 people on board, had left, and headed for the Skerryvore Lighthouse, the fog had lifted.

The other boats saw the shape of a ship nearing them and headed towards this ship. By luck the nearing ship was the Norwegian ship "Viking", captain Hunland, also off her regular course due to the fog, picked up the survivors from all but one of the lifeboats.

The other lifeboat had managed to reach the safety of Skerryvore Lighthouse, situated about three miles to the east of McKenzie’s Rocks. The "Viking" landed all the survivors she had collected at Tobermory, on Wednesday evening.


By the 6th March 1899 the grain, due to the seawater, had swollen to such an extent that the Labrador split in two and it was regarded as a total loss.

The cargo comprising of grain and 153 bags of mail were left to the ravages of the sea and weather. The crew and passengers lost all they possessed. Captain Erskine sent a message to his headquarters of Messrs. Richards, Mills and Co., managers of the Dominion Line of steamships in Liverpool.

When the managers read the message, they immediately dispatched the Liverpool tug, "Great Emperor", with a crew of divers. The Oban lighthouse steamer appears to have been unsuccessful in salvaging any mail. An unknown number of these bags of mail were salvaged and delivered to the postal authorities at the ports of Glasgow and Liverpool .

On April 7th, The Board of Inquiry investigated into the loss of the liner and came to the conclusion that captain Erskine was in default and suspended his certificate for three months.

Jewels and silver was amongst the items lost and not recovered afterwards by the passengers...

Montreal - 14 September 1905. George B. Blandford, a cattleman, wrote a letter telling of the disaster and threw it overboard in a bottle. The letter was addressed to a Montreal newspaper. The bottle was picked up on 17 August, at New Harbor, on Hermitage Bay, Newfoundland, by Reid Durnford, a local fisherman, and has been brought to Montreal. It took the bottle six and a half years to drift across the Atlantic. 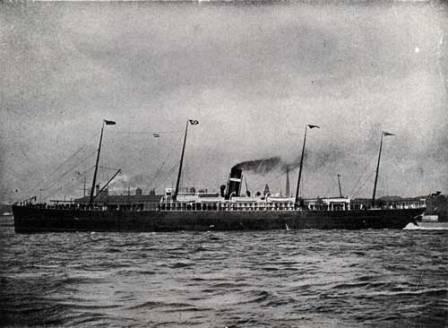 The steamer "Labrador" and the emblem of the Dominion Line