Captain Graham Moore was commanding "Her Majesty Ship Indefatigable" and three more frigates when a Spanish flotilla was intercepted at Cape Saint Mary (Portugal), on 5th October 1804, the scene is recreated by this painting  (below) by Francis Sartorius.

Vice-Admiral Sir Graham Moore (1764-1843) was a British sailor and a career officer in the Royal Navy. He was the younger brother of General Sir John Moore. He entered the Navy in 1777 at the age of 13, gaining promotion to Lieutenant in 1782.

He was made Post-Captain in 1794, soon after the start of the Revolutionary War, commanding the 36 gun frigate "HMS Melampus" from 1800, before being appointed to "HMS Indefatigable" (44) in 1803.

Spain was at the time a neutral country, but was showing strong signs of declaring war in alliance with Napoleonic France. Acting on Admiralty orders Moore required the Spaniards to change their course and sail for England. The senior Spanish officer - Rear-Admiral Don José Bustamente - refused and opened fire on the British, leading to a short battle, during which the Mercedes blew up. The remainder surrendered and were escorted to Plymouth.

The value of the treasure was very large and if it had been treated as Prize of War, then Moore and his brother captains would have been set for life many times over. As it was the money (and ships) were declared to be - Droits of Admiralty - on the grounds that war had not been declared, and they got a relatively small ex-gratia payment.

"Nuestra Señora de las Mercedes" had 36 guns and was launched in 1786.

Sunk in 1804 by the British Navy off the coast of the Algarve, the frigate had become a legend for treasure hunters in the second half of the 20th Century. Although her cargo can hardly be considered a treasure, the history of her loss and the stories of the adventurers who tried to gather funds to find and recuperate her remains, make this case an interesting example for the discussion of the questions related to the archaeology of ships with treasure From official cargo list declarations, the Spanish frigates had been carrying treasure: 1,307,634 dollars in silver with wool, bars of tin and pigs of copper belonging to the Spanish king; 1,859,216 dollars in silver 1,119,658 dollars in gold and 150,011 gold ingots belonging to merchants, and seal skins and oil belonging to the Marine company. 1,111,949 silver dollars, half the copper and quarter of the tin went down with the "Mercedes".

Captain Sutton was “very actively employed during the most important part of his Lordship’s command in the Mediterranean station, and had the good fortune to assist at the capture of a Spanish squadron laden with specie on 5th October 1804". The "Amphion" on this occasion was opposed to la "Mercedes", the Spanish Admiral’s second astern, which blew up with a tremendous explosion in less than ten minutes after the commencement of the action, and all on board except 40 men perished. Nelson was to again correspond with Captain Sutton about Lord St Vincent’s reluctance to make recommendations to the King regarding the award of medals for this action.

Captain Sutton obviously had hopes of great rewards from the capture of the Spanish squadron’s booty, and wrote explicitly to Emma, Lady Hamilton, on the 20th October 1804: “They are very valuable, having on board nearly one million in sterling in specie. I hope it will turn out a good thing for that great and good man Lord Nelson, as well as for myself… Bolton told me his Lordship meant to leave the fleet a few days afterwards in the "Superb" for England so that if this Spanish business does not prevent him from quitting the command his arrival may be shortly looked for…

Two of the frigates present on this occasion belonged to Admiral Cornwallis, the other two to Lord Nelson, so that it prevents any dispute as to the right to share prize money.” Emma quickly circulated the news; [her] family were soon like bees around a honey pot. In the event there was to be no prize money as such. War not having been declared, the ships and treasure were a droit of the Crown and so - A grant was made to the captors which, according to one account, amounted to a quarter of a million sterling - One-eighth of this shared by the commanders-in-chief the flag officers on both Nelson’s and Cornwallis’ stations would have been £31,250.

It was in September, 1804 that the government had received information that the French had been given permission to march through Spain to man ships lying at Ferrol and a blockade was set up. On 22nd September, Captain Moore on the "Indefatigable "had received orders to search for and detain two Spanish frigates expected with treasure from South America. He arrived off Cadiz on 29th September and took the Lively under his orders on 2nd October.

When the "Indefatigable" fired a second shot, the Mercedes unfortunately fired into the "Amphion". The Spanish Admiral fired at the "Indefatigable" and a general fight began. The "Mercedes" blew up alongside of the Amphion and only 40 of her crew were rescued by the "Amphion's" boats. Within half an hour, the Spanish frigates "Fama" and "Clara", had surrendered and the Spanish Admiral's 40 gun frigate, "Medea", had fled.

Friday 5th October 1804 - ...Discovered them to be four Spanish Frigates, they formed the line of Battle ahead. Captain Moore sent an officer to inform the Spanish Admiral that he had orders to desail them, not wishing to spill any Blood. Fired several shot across the Spanish Admiral's ships and made the signal for the boat which returned without Satisfactory answer.

The "Mercedes" and her treasures was lost for ever in the depth of the ocean... Until controversial news about the recovery of 17 tons of coins by the salvage company Odyssey in June 2007 and the epic stories and secrets surrounding their venture.

Was it finally the treasure of the "Mercedes" that was salvaged ? No one knows yet, but it is a possibility amongst several others... 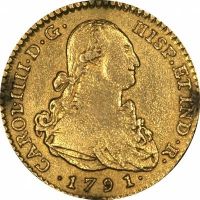