Collision and loss of valuable and specie

The "Parsee" was a little steamer employed in the East India country trade, owned by Messrs. Jeejeebhoy Dadabhoy, Sons & Co. and commanded by captain Griesdale. She was totally lost by a collision  with the "Sir James Rivett Carnac", captain P. Duverger, a vessel employed in the same service, but fortunately without loss of life.

The "Carnac" was on her way from Bombay to Tankaria Bunder and the "Parsee" was returning by the same route, with a cargo of 525 opium chests, valued at three lakhs of rupees, as well as a large number of native passengers on board; she had taken 45 when she touched at Surat. The collision took place in about 20° north of latitude, and 12 miles from the shore, about 11 o'clock at night, on 29th of October, in about 17 fathoms of water.

The night was fearfully dark and excepting the watch, all hands were asleep. It would appear that as both vessels had lights hung out, each was aware of the presence of the other, but unfortunately by mistake or ignorance , both altered their course in the same direction, and in consequence  the "Carnac" ran into the "Parsee"  on the starboard side, just abaft the foremast, cutting her side completely through.

No time was lost in saving the whole of the passengers  and crew, consisting of 70 souls; and just as the last man stepped out of her, the little steamer sank.

The injury done to the steamer "Carnac" is trifling, her bowsprit was split and the bows injured.

She is undergoing the necessary repairs to enable her starting this day, 20th November, in prosecution of her voyage. This is the first collision in the Indian Seas. 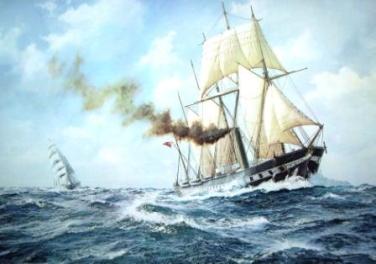 The coastal region of Surat, India -  An early steamship