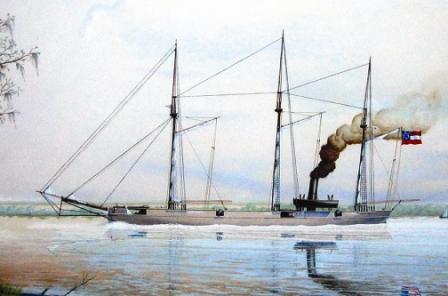 A University of South Carolina archaeologist has found the wreck of C.S.S. Peedee, a Confederate gunboat that was destroyed by Confederate forces so it would not be captured by Union forces, in the Pee Dee River.

The discovery comes 18 months after underwater archaeologist Chris Amer confirmed the presence of two of three cannon from the gunboat in the river: a Confederate Brooke rifled cannon and a Union Dahlgren smooth-bore, 9-inch shell cannon near the Confederate Mars Bluff Navy Yard.

"This isn't a boat resting neatly on the river bottom," Amer said. "The remains are as messy as the history that put it there. Together, the wreck and cannon tell a story about the little known but very important role that inland Confederate naval yards played in the Civil War.

Amer said that after an unsuccessful three-week search in July to determine whether the elusive third cannon was hidden under the Dahlgren or under a handful of artillery shells on the river's bottom, he returned in September to follow up on clues about the Peedee's location.

The clues included some data from downstream that he gathered in 2009 and a personal account by a man who claimed that he witnessed a salvage operation of the Peedee in 1954.

"Michael Hartley, an archaeologist in North Carolina, said he was 12 years old when he watched a group of men salvage a boiler and parts of C.S.S Peedee at Mars Bluff," said Amer. "He said the water was low and that he made a detailed map of its location."

Hartley, once on staff at USC's South Carolina Institute of Archaeology and Anthropology (SCIAA), gave Amer a file that he had created on C.S.S. Peedee.

"I was able to go right to the spot," said Amer. "Hartley's account matched up with magnetic readings that I took of a 25,000-square-foot area."

In November, Amer used sonar to search for the debris and found evidence of the wreck: ripples on the sand where sediment had built up over debris, magnetic "hits" in straight lines depicting the iron bolts along bedding timbers and a tree stuck on something substantial on the river's bottom, possibly ship timbers.

"It's in pieces and buried, although I'm not sure just how deep," Amer said.

The condition of the wreck doesn't surprise him. After all, he said, the Confederate commanders set the 170-foot gunboat ablaze and blew it up in 1865 so it wouldn't fall into the hands of Gen. William T. Sherman's northward advancing Union troops.

He said in the early 1900s, the U.S. Army Corps of Engineers further damaged the wreck while clearing the river channel for boat traffic.

Disruptions to the wreck occurred in 1925, Amer said, when propellers were salvaged, and again in 1954, when Hartley witnessed the salvaging of two engines, a boiler, propeller shafts and a 30-foot section of the stern.