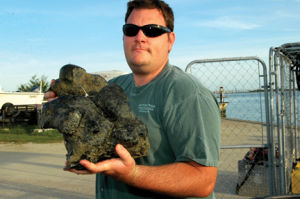 State underwater archaeologists have been pulling up treasures from the Queen Anne’s Revenge shipwreck in Beaufort Inlet, including two small cannons and cannonballs.

Divers began their fall dive season Aug. 5 and will continue excavation of the site through Oct. 31, according to Billy Ray Morris, QAR project director and deputy state archaeologist.

While many of the items brought up so far have been ballast stones, which have smaller artifacts embedded in them, archaeologists retrieved two small cannons Aug. 16. The cannons, along with other artifacts, have been transported to the conservation lab in Greenville.

Artifacts found in the ballast stones brought up from the site include cannonballs, lead shot and sounding weights, which were weights dropped to the ocean floor to discover the depth of the water.

Mr. Morris said he’s hoping to bring up three larger cannons later in the fall once a state vessel large enough to hoist them is available.

Archaeologists had hoped to bring up eight cannons in May and June during the spring dive season, but high winds and waves prevented them from reaching their goal.

They did manage in June to bring up two cannons that are six-pounders (shot 6-pound cannonballs).

Those two make 15 cannons retrieved from the site since its discovery in November 1996. Twenty-seven cannons have been discovered at the wreck so far.

Mr. Morris said the weather has cooperated for the fall dive season and he hopes it continues.