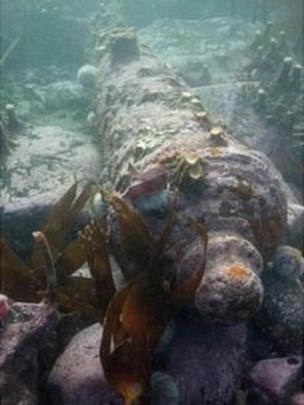 In the early 1700s a Dutch ship was lost on the notoriously dangerous rocks of the Farne Islands, off Britain’s east coast.

Since then the wreck has lain at the bottom of the sea, hidden and forgotten, until the 1970s when divers from the local Tyneside British Sub Aqua Club came across a large collection of cannons scattered across the seabed.

The club undertook a measured survey of the site. In 2013 Wessex Archaeology was commissioned by English Heritage (now Historic England) to revisit the wreck site and update the survey.

We worked closely with the local divers who had found the site, and undertook both sonar and hand-measured survey, helping us to understand the site more clearly than ever before, as reported on the BBC.

Earlier this year we went back to give a talk to the local divers about our results, see our blog about the evening.

As well as our normal survey methods, the survey in 2013 gave us another opportunity to use a fairly new technique called photogrammetry.

This is fantastic for underwater archaeology and allows us to create realistic 3D models of parts of the site.

We have now put our 3D models online ahead of our upcoming talk about the wreck at the Ordnance Society’s Guns from the Sea conference on the 5th September.

These models are a great tool in helping us to rapidly record and understand these amazing artefacts, and now you can see them in all their detail through your browser !