A graveyard for ships explored 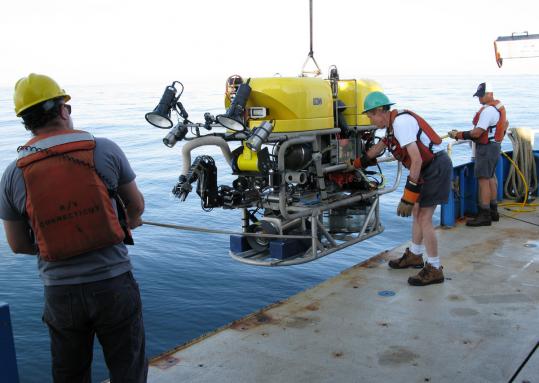 By James Sullivan - The Boston

About a million people a year head out on Massachusetts Bay for whale-watching cruises, according to Deborah Marx of the National Oceanic and Atmospheric Administration.

The stretch of ocean from Cape Ann to the tip of Cape Cod is especially rich with marine life due in large part to Stellwagen Bank, an underwater plateau formed during the Ice Age, now designated a National Marine Sanctuary.

While on the water, whale-watch guides often introduce passengers to another intriguing feature of Stellwagen Bank: It is a burial ground for dozens of ships that have sunk there over the years.

On Feb. 18, Marx and Matthew Lawrence, a fellow NOAA maritime archeologist, will present “The Shipwrecks of Stellwagen Bank’’ at Maritime Gloucester.

The presentation features “The Wreck of the Steamship Portland,’’ a 45-minute Science Channel documentary on the 1898 disaster, which Marx said is the sanctuary’s poster child for shipwrecks and the secrets they keep.

It’s a popular event because of the close ties the North Shore communities, and particularly Gloucester, have to the ocean, Marx said.

Many of the wrecks on Stellwagen were fishing vessels; others were schooners or, like the Portland, passenger ships using the busy ports of Boston, Gloucester, and Provincetown.

Archeological research on shipwrecks like the Portland are truly historic, Marx said, revealing details about our shared heritage, the lives and livelihoods of our great-grandparents’ generations, and much more.

Marine sanctuaries like Stellwagen Bank, which the National Oceanic and Atmospheric Administration oversees - this year marks the 20th anniversary of the designation, are “the equivalent of an underwater park,’’ she said.

The Portland, a paddle-wheel steamship that ferried cargo and passengers between Boston and Portland, Maine, operated for almost a decade before it went down in a savage storm in November 1898. All 192 passengers and crew were lost; the storm became known as the Portland Gale.