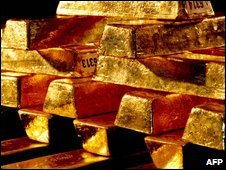 A vessel which sank carrying $18m (£11m) in gold and silver ingots has been found in the Magellan Straits off the coast of Argentina.

The cargo belonged to Argentine mining companies Cerro Vanguardia and Minera Triton and was on its way from mines in southern Argentina to Europe.

The boat sank in heavy seas in mysterious circumstances in January.

Although the vessel has been found, it is unclear if the nine and a half tons of cargo remain on board.

The Chilean fishing boat, the Polar Mist, set sail from Santa Cruz in southern Argentina for the port of Punta Arenas in Chile.

The bullion was heading first to Santiago in Chile, and then on to Switzerland for sale. But a day after setting sail, the crew abandoned ship in a heavy storm.