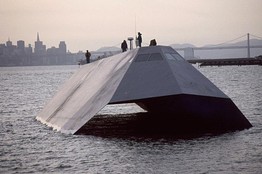 Anybody want some top-secret seagoing vessels ? The Navy has a pair it doesn't need anymore. It has been trying to give them away since 2006, and they're headed for the scrap yard if somebody doesn't speak up soon.

One is called Sea Shadow. It's big, black and looks like a cross between a Stealth fighter and a Bat mobile. It was made to escape detection on the open sea.

The other is known as the Hughes (as in Howard Hughes) Mining Barge. It looks like a floating field house, with an arching roof and a door that is 76 feet wide and 72 feet high. Sea Shadow berths inside the barge, which keeps it safely hidden from spy satellites.

The barge, by the way, is the only fully submersible dry dock ever built, making it very handy -- as it was 35 years ago -- for trying to raise a sunken nuclear-armed Soviet submarine.

"I'm fascinated by the possibilities," Frank Lennon said one morning recently. Mr. Lennon runs -- or ran -- a maritime museum here in Providence. He was standing in a sleet storm on a wharf below a power plant, surveying the 297-foot muck-encrusted hulk of a Soviet submarine that he owns.

His only exhibit, it was open to the public until April 2007, when a northeaster hit Providence and the sub sank.